PSA - Why letter instead you can just Chuck it in the bin.

Were both talking about why we shouldn't letter,and we should take better care of the environment.


We both think that people should be chucking their rubbish into the bin,not throwing it on the ground. Because the rubbish could lead to animals and cause serious damage to him or just kill them.

Agree Or Disagree?
Working with each other can sometimes be okay..But when it comes to those times when their Just loud and just being Annoying, That’s mostly My reason why I Disagree that boys shouldn’t be in the same class as girls. It should Just be meaning separate. Boys in boys class and girls in a girls class.

I Disagree that girls and boys should not be in the same class but same School.

My Opinion is that Because some girls and boys are friends with each other, But to me some boys in class can be Annoying,Idolise when girls are trying to do their work and just finish off what they're supposed to be doing. Well the boys just lose it. In other classes some kids say that girls and boys can help each other if they just work with each other or that…. Even some girls can be annoying to the boys but it’s the Teacher that tell them to finish off their work. The Teacher is struggling by telling the class to calm down. Idk

At Tamaki college for the whole day

On Tuesday the 13th of March,What We did today at Tamaki college. The year 8's had to go down to Tamaki for the whole day, When we got there, there was one of the Teachers who guided us to the school hall. So when I had walked in I saw some Of the Year 9's from last year who came to Pt England, They were sitting on a Couple of Chairs that were already stacked out for us and them to sit on. After He was talking to us about What it would be like going to college: Like going to Tamaki college, Because He Was explaining to us and some other Teachers as well when we got split up into Three groups and had to roam around the School with some of the helpers.

Then after that The man Gave all of us a paper that had what classes their were, Like Social Science,Maths,PE,and English then after we would go to our normal tech groups. While he was finishing he released us off to go to the class, My group had to go to Maths First and what I experienced in maths was soo Fun!

The Teacher's Introduced themselves to us, Their names were Ms apelu and Ms Robertson. Well In maths we played this game I think,but yeah it's called Pursed  - Street View. It was fun for the game we had to figure out which city we were in. But at the end I only got up to Level 4. Then it was time to go to the next Class.

Social Science: In Science there were two Teacher's Named Mr Mohaultra was Showing us a little bit of water In a little Laboratory with his Tools. So he got both of the waters from the Omaru Creek and from were Donald Trump Lives. Then he Added them together and it made Yellow Chemicals,Everyone in class was slightly Surprised especially Me. He showed and gave us a sample of

After He got out some binoculars,also some Bigger Binoculars. They both went around the room so that everyone got a chance to get a turn to look threw to see what it would look like. But When I looked threw the Small Binoculars it was kinda blurry for me. At the End of the day we had PES, Another Teacher Mr Moist, For sports we just Played Volly ball til the end of the day. But while I was at Tamaki It was fun seeing the year 9's having fun at College. and I experienced what would college be like for me Next Year!
Posted by Gwynn at 09:59 1 comment:

Today in the Middle block The Year 7 & 8,we had someone come Talk to us about Our Attitude,How all of our attitude is and how we would be using it. His name was Toni,He explained to us What culture he was and What school/College he use to go to. While he was talking to well everyone is Team 5 block, I featured a lot of Experience of what he had said,The first thing He talked about was 4 animals. - The four animals everyone had to pick which one they were, What their Personality was or something else like that. First animal was Otta, Kids that thought they were a Otta,that Animals personality would kinda Explain what they were...For Example if their in class trying to do a test and you already finished your Test in the next half hour. 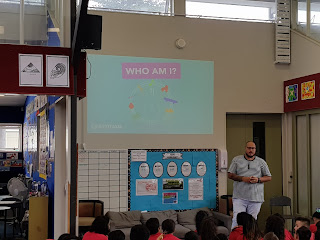 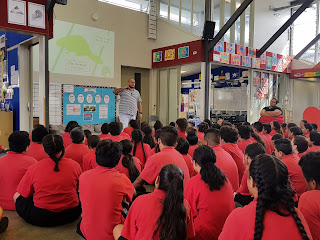 Then After you start to get quite bored,Start to make some noises with your pencil. It was Funny after Toni had explained something quite after he just said Him not along time ago was like that. Names of the four animals Toni Talked about: Otta is Calm,Funny > Little bored sometimes an I'm sure that would be me in class if we would be either doing a test or that. The next one is Lion,Wow I surprised that Lion was The Sassy,Leader kind of Person/Animal guidance.

Then we go to the GOLDEN RETRIEVER!! Was Loyal,Kind, an can never - sometimes can't say no. and I guess I'm That Animal, The Golden Retriever, I'm sometimes can say no to Negativity because it my cause a problem or something else worse. plus I'm loyal and kind especially to my friends that are close to me. So I'm two animals that's Otta and the Golden Retriever. After He talked About Animals the next Part he got onto was "Who are you ".... and it said a couple of words down below that had Genes,Environment,also Choices. Like a Little Advice for us.

I wondered to myself what did all those words mean..But Genes Obviously means "DNA". Like if you look at yourself and think why is my mum White and my dad brown, Then you look at your Skin,and your Skin colour is Caramel - Chocolate. But yeah That's The DNA of your parents. if one of your friends are Way! Taller than you then that must run in the Family or just From Your Parents or any other siblings of yours.

A Load of rubbish

So I was reading a Story on kiwi kids news about how much Plastic items are washing up on an island Debris and Henderson in the south Pacific. Question : Why do people/kids do this,They may litter their rubbish mostly everywhere they go and that. But one thing they can not do is pick up their rubbish and throw it in the Bin.

Kia Ora! My name is Gwynn,I go to Pt England school, I stay in Auckland. I am 11 years old, I have 4 siblings including me, their names are Karmar, Kiwi,Tamikaa, my favourite things to do is sometimes go to my friends house and play with them. My friends names are Eva,Aretafaye, Kalita and Syriah, my best friend is eva because she lets me come over her house sometimes to hang out with her. I LOVE! To play Netball,Cricket,my favourite food is KFC,favourite band is the vamps.my favourite subject at school is reading and maths,My learning goals,this year I hope to improve in my work, take charge, finish off properly. Please leave a comment on my blog.

Who is visiting this blog?