So in Florida a rocket was gonna take off at NASA's Kennedy Space Center in Cape Canaveral, Florida, Tuesday . On Wednesday in Florida at 9:45am as the (NZ Time) and Launched it. Plus Falcon heavy, The world's most powerful rocket as it launches, as it’s supposed to happen and SpaceX Successfully  launched its first Falcon Heavy. From the beginning the heavy was enable SpaceX was to complete the contracts To Launch the larger spy satellites. 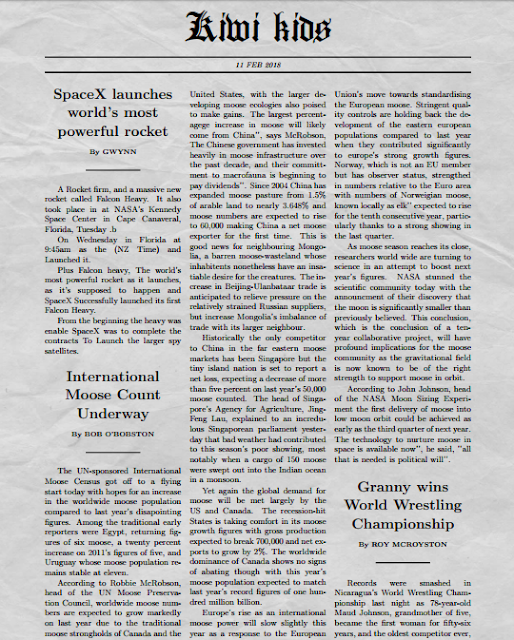 Kia Ora! My name is Gwynn,I go to Pt England school, I stay in Auckland. I am 11 years old, I have 4 siblings including me, their names are Karmar, Kiwi,Tamikaa, my favourite things to do is sometimes go to my friends house and play with them. My friends names are Eva,Aretafaye, Kalita and Syriah, my best friend is eva because she lets me come over her house sometimes to hang out with her. I LOVE! To play Netball,Cricket,my favourite food is KFC,favourite band is the vamps.my favourite subject at school is reading and maths,My learning goals,this year I hope to improve in my work, take charge, finish off properly. Please leave a comment on my blog.

Who is visiting this blog?